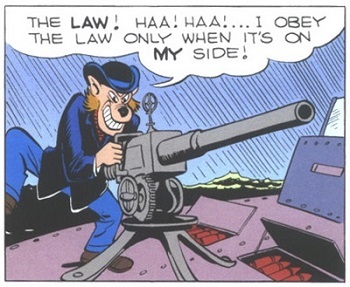 If only more characters expressed their character alignment this explicitly.
"For mine own good, all causes shall give way."
— Macbeth, Macbeth
Advertisement:

One of the nine alignments from the best-known Character Alignment system. Sometimes known as the "Asshole Alignment" or "True Evil". Characters of this alignment fit neither end of the Law–Chaos axis, hence "Neutral", but they land at the morally worse end of the other, Good–Evil axis. Their methods vary; just as the Neutral Good character will ally with anybody to do what's right and nobody to do what's wrong, the Neutral Evil character will ally with anybody as long as it advances their own interests — and it is all about their own interests. These characters do not respect other people as people like themselves with feelings and needs; rather they are tools or obstacles inferior to the Neutral Evil, to be used for their advancement. Neutral Evil characters are intrinsically selfish people, regardless of whose side they are on, and as a Token Evil Teammate, they may sell out to the bad guy if it makes achieving their goals significantly easier.

Some of the world-shaking ones may seek to tear down an old order, good or bad, to set up their own order — not because their way is better, or for the pleasure of tearing it down, but because they want to be in charge. They will do it using any means at their disposal. To a Neutral Evil character, honor, standards and keeping your word is all well and good, so long as it doesn't get in the way. If their opponent is honorable and decent, that's great because they can exploit it. They are very prone to saying, "I Lied".

While they are usually villains, they can also switch to the good guy's side for a while, if it's better for them at the moment. True Magnificent Bastards of the Neutral Evil persuasion can sometimes (with a little luck) lure other villains into an Enemy Civil War, usually along the lines of Order Versus Chaos — playing Lawful Evil against Chaotic Evil — and cleaning up at both sides' expense.

Neutral Evil is, usually, the most dangerous type of evil to fight. Typically, neutral evil characters are The Unfettered, though that isn't to say they follow no code but rather only follow rules or codes that benefit them. Neutral Evil characters will use the law if it suits them but will throw it away as needed for their purposes. What can make them very dangerous is that, the intelligent versions of this trope, tend to be strict followers of Pragmatic Villainy. Ultimately, what matters is what they want and will cross any line to get it.

Neutral Evil types can come in a variety of different flavors:

In practice, Neutral Evil often simply means "Evil", so Lawful Evil or Chaotic Evil are simply cases where one of the above types meets Lawful or Chaotic Neutral inclinations.

Neutral Evil can be the most dangerous alignment because such characters are willing to step on, betray, take advantage of, hurt, and kill other people to reach their goals and get what they want. The Neutral Evil have no difficulty working with others so long as their own needs are met. However, they also have no difficulty betraying former companions if there is some gain in doing so. They are also extremely susceptible to bribes.

In Dungeons & Dragons, characters who are selfish above all else are Neutral Evil by default.

If you have a difficulty deciding which alignment a evil-aligned character belongs to, the main difference between Lawful Evil, Neutral Evil and Chaotic Evil is not their devotion to their evil wishes, but the methods they believe are best to realize it:

Others, such as the Big Bad, can vary between Lawful Evil, Neutral Evil, and Chaotic Evil.

Expect any Neutral Evil state to be Mordor, and a Neutral Evil city the Wretched Hive. Neutral Evil characters are likely to be Unfettered. If they are, they can also be the most lethal kind of villain, as the most extreme kind of neutral evil (not Chaotic Evil like one might think) is what gave rise to the concept of the Omnicidal Maniac (though most Omnicidal Maniacs tend to slide into Chaotic Evil by the end). Many Corrupt Corporate Executives are Neutral Evil Jerkasses in charge of Lawful Evil MegaCorps — it's easier to get ahead in business when you cheat. Unlike a Lawful Evil CCE who'd fly into a rage over somebody else's infractions, Neutral Evil sorts rarely care (as long as they themselves stay ahead) — a suitably Affably Neutral Evil businessperson might even applaud a fellow cheater's "initiative."