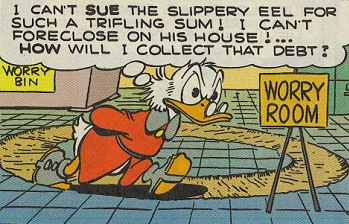 “The collected debt would then go on to pay for the floor repair.”
Advertisement:

When a character waits for someone or thinks about something really important to them, they will normally pace around the room while doing so. Maybe they will walk back and forth in a straight line, or maybe they will walk in a circle. That's normal.

But some characters tend to really like doing it. They walk along the same path so much that they actually wear down the floor, and if left to pace long enough, you might find them in a literal trench made by their own feet. Hopefully the plot might call them before they end up in China.

This is normally a comedy trope to show that the character has been thinking about their problem so much and concentrating so hard that they haven't noticed they have dug themselves into a hole.

Timmy creates a circular trench in seconds by running around in panic from an incoming angry mob.

Timmy creates a circular trench in seconds by running around in panic from an incoming angry mob.