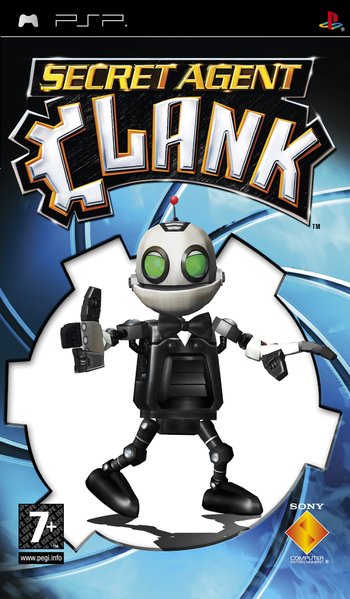 This time, the secret agent IS the gadget.
"I know this has become personal for you, but we believe this theft is part of a larger plan. It's imperative that you remain objective, and complete the mission."
—The Agency Helpdesk's words to Clank upon discovering that Ratchet has stolen the Eye of Infinity.
Advertisement:

Ratchet is framed for a museum robbery, and Clank must assume his James Bond-esque alter-ego to find the real culprit. Meanwhile, Ratchet must survive in prison, and Qwark is writing his biography.

While Clank is the main character, and the one who gets the most screen time, he's only one of four characters the game cycles through as the story plays, each one with a different gameplay style and goals. They are as follows:

Good evening, troper! The wiki is expecting me.

When it was done, the town was not too thrilled!
With the big mess and my giant bill!
They said I should stay and mop the floor...
But I told them my contract staaaaaaates...
"Caveat emptor!"