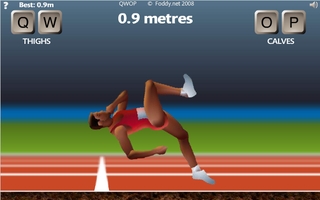 D'oh!
You are Qwop, our small nation's sole representative at the Olympic Games.
Use the QWOP keys to move your legs.
Ideally you will run 100 metres...
...but our training program was under-funded.
Remember, it's not about whether you win or lose.
—Title screen for Qwop
Advertisement:

is a Flash-based Sports Game by foddy in which you must get Qwop to run 100 meters without falling over. Uniquely, you control Qwop's individual thighs and calves. It is much harder than it sounds. It has a two-player sequel named 2QWOP.

Despite the game first coming out in 2008, it achieved massive internet popularity and Memetic Mutation in December of 2010 after Ray William Johnson showcased a Let's Play video of it.

The success of QWOP has led to several related games by foddy, including Winner vs. Loser

which is likewise based on track & field, and GIRP for the idea that controlling basic human motions is difficult. A true successor to QWOP, CLOP, has you controlling a Unicorn with similarly difficult controls. Another, much more notable Spiritual Successor came in the form of Getting Over It with Bennett Foddy, which, in addition to being almost as unforgiving in difficulty as the others, also features Foddy himself the narrator.

QWOP has examples of the following:

PARTICIPANT
showing real courage, you wrote:
35 examples
everyone is a troper