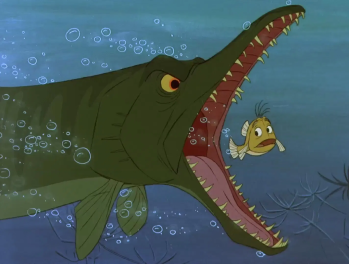 Danger at a massive scale.
Pike are a widespread genus of carnivorous freshwater fish found in Eurasia and North America. As aggressive predators prone to cannibalism, they're often used as a river-going threat in animal-centered works. They aren't usually depicted as a threat to humans, but they will often be shown as a Super-Persistent Predator towards smaller fish and other animals, or conversely as the Animal Nemesis of a fisherman. This part is Truth in Television, as pike are fierce fighters when hooked and several kinds of pikes (or pike-like fishes such as the Muskellunge), are prized as sport fish.
Advertisement:

Other fish that resemble pikes are also portrayed in the same way. Barracudas are often portrayed as essentially the saltwater version of pikes, although despite looking a lot like pikes, and even being referred to as "sea pikes," they aren't closely related note Pikes are closely related to mudminnow, and more distantly to salmon and trout; while barracudas don't have immediate relatives, but are allied to the group formed by jack mackerels and remoras, billfish and 'flatfish'. Gars, especially the gigantic alligator gar, are another common alternative in freshwater settings.

Sub-Trope of Fiendish Fish. Compare The Catfish (where the fish's size makes it a Worthy Opponent to fishermen), Piranha Problem for the tropical equivalent, and Threatening Shark for saltwater dangers.

See Blade on a Stick for a differently-dangerous kind of pike (both come from a word meaning "pointy").