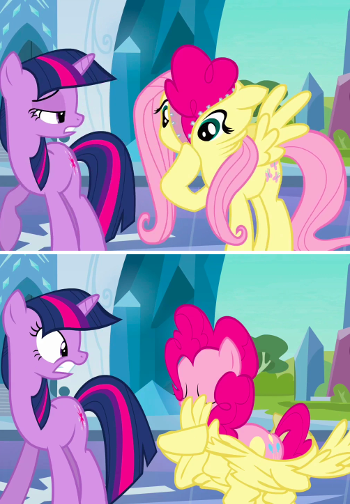 And when we say full-body, we mean full-body.note It also helps that Pinkie Pie shares the same voice actress as the pony she's disguising as.
"That is not Dick Clark, that is a Dick Clark rubber mask, with a zipper in the back. When he gets off that TV show, year after year, week after week, systematically lowering the standards of this country, he undoes that zipper and underneath... is a cloven-hooved, horned wolverine."
— Bill Hicks
Advertisement:

Sometimes you don't need a full-on Invisibility Cloak. You don't care if people see you, just if they see the real you. And so you don an ensemble that completely obscures your features and possibly even your whole body. This is far more than a simple Wig, Dress, Accent. There isn't anything left of you to make out. The you beneath the suit is effectively invisible.

Any superhero or villain with a full-face mask would be included here, (Harley Quinn's make-up counts — how many people would recognize her without it and her trademark clothing and hairstyle?) but superheroes with no mask (Superman) or partial masks (Batman, Robin, Green Arrow) would not.

Contrast Paper-Thin Disguise. Also see Black Cloak and Lie to the Beholder. When done with just the face or head, then it's Latex Perfection.