Literature / Shadows on the Moon 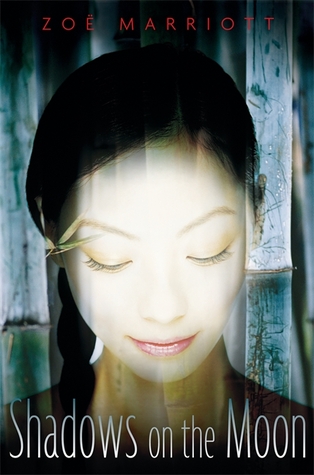 Cover
"Love comes like storm clouds
Fleeing from the wind, and casts
Shadows on the Moon"

A retelling of Cinderella by Zoe Marriott set in the Japanesesque land of Tsuki no Hikari no Kuni.

The novel is divided into three sections—Suzume, Rin, and Yue—each covering a different phase in the heroine's story, during which she goes by one of the aforementioned names.

The first section sets the stage. Suzume's father and cousin are executed, supposedly under the orders of the Moon Prince, and her mother remarries suspiciously quickly to an old family friend. Suzume only managed to survive thanks to the discovery and application of shadow weaving, or magical illusions. At her stepfather's estate, she sinks into depression from mourning her father while having to pretend nothing's wrong. Things hit the boiling point when she discovers that her new stepfather murdered her father so that he and her mother could marry. Oh, and her mother's okay with it. Rather understandably, Suzume attacks her stepfather after this little revelation, before fleeing into the night.

Since the best place to hide is right under someone's nose, Suzume sheds the trappings of nobility, goes to work in her household's kitchens, and takes on the persona of Rin, a mute slave girl. She stays here for a while until she poisons her mother's food after realizing said mother has completely forgotten about her. Her Secret Keeper realizes she can't stay anymore, or she'll do something drastic again, so out she goes into the wide, wide world.

The third arc of the novel has Suzume/Rin taken in by Akira, a retired Geisha (called gijo in the novel) with a few secrets of her own. It is Akira who hands her charge, now called Yue, the opportunity for revenge.

Shadows on the Moon provides examples of: