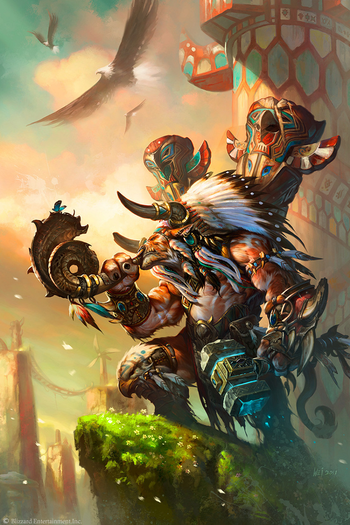 Our Minotaurs Are Different plus Tipis and Totem Poles equals the Tauren.
Rainbow Dash: Too late, they see us!
Applejack: Who?
Rainbow Dash: This is World War I. Who do you think? The unicorns!
— From MAD's parody

of My Little Pony: Friendship Is Magic
Advertisement:

Creating a completely new culture from scratch can be a daunting task. Think about everything the word culture encompasses—music, food, clothing, etiquette, dance, religion, and combative traditions, to name a few, and even if one manages to pull it off, one runs the risk of ruining audience's Suspension of Disbelief by having one's creation seem too strange. To lighten the burden of creating a believable fictional culture creators often base one or more of their creations off of real human cultures from various times or places. The countries may have significant names resembling the place they are based on.

This is especially common in Constructed World or Fictional Earth settings, but by no means exclusive to it. It's also often found in satire, as a means of indirectly poking fun at the culture in question.

There are also sound literary reasons for using this trope. Making the Shire an idealized England transplanted to Middle-earth makes it easier for readers to identify with the point of view characters, since they probably have much more in common with Bilbo than with Thorin. Guy Gavriel Kay's The Lions of Al-Rassan is a thinly disguised historical novel, but changing the names of the countries and religions means the readers don't know how the story will end, helping to maintain dramatic tension.

It's also more easily justified in works containing humans: the Real Life counterparts of the fictional cultures have all actually come into existence and are the results of real groups of people coming together to build something over time. Basing a new society on one that's already had a turn at some point in human history can both help the audience relate and provide a creative framework to twist and turn said society into an interesting variant of its former self. However this approach still has its risks — if the Fantasy Counterpart Culture is based on a too simplistic view of a particular region of the world, it ends up lacking both in depth and originality.

Compare with Istanbul (Not Constantinople), when a real place is referred to with a more archaic or obscure name (e.g. "Columbia" instead of "USA"). Compare also with Days of Future Past, where a futuristic society duplicates (often explicitly and intentionally) the culture and styles of a historical period. Compare with No Communities Were Harmed, which is this applied to a locality, and Fantasy Counterpart Religion for when is applied to a religious group. Compare Fantastic Fauna Counterpart for a similar concept applied to animals, i.e. an animal species being used as a substitute for another.