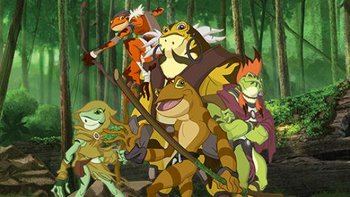 Kulipari: An Army of Frogs is a Netflix original animated series based on the book trilogy written by ex-NFL player Trevor Pryce. The show takes place in Amphibilands, a village populated by frogs who live in peace and are protected by a magical barrier known as the Veil. When the frogs find their homeland in danger after an evil scorpion ruler teams up with a spider queen, a young frog named Darel must venture out of the Veil to seek the Kulipari, an ancient clan of poisonous frog warriors who defend the Amphibilands from evil.

Red 5 Comics published a sequel comic, Kulipari: Heritage set after the events of the first season following Burnu on his quest for the Poison Scrolls.

Several spin-off projects based on the Kulipari universe are in the works, all of them due to premiere on Pryce's digital channel in 2021, including:

Kulipari: An Army of Tropes: