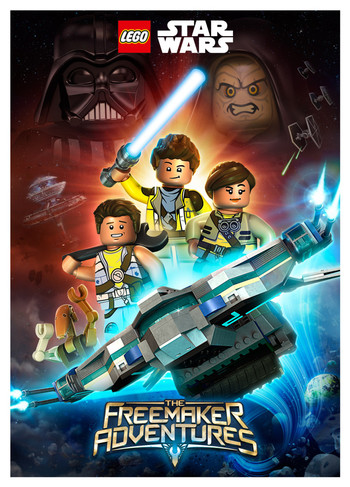 Their mission didn't come with instructions.

LEGO Star Wars: The Freemaker Adventures is an animated series on Disney XD, set between The Empire Strikes Back and Return of the Jedi, focusing on a brand new cast of characters.

While the war between the Rebel Alliance and the Galactic Empire rages, a trio of siblings try to scrape out a living salvaging the wreckage, building ships from said wreckage, and hopefully selling them for profit. But everything changes after a chance encounter with a mysterious Force-wielder and a piece of an ancient weapon.

The series has been described as "canon paraphrase," meaning while the basic events covered are canon, the specifics are not, like a child is acting out the events with their toys.

Its second and final season was announced for summer of 2017. The show was followed up by LEGO Star Wars: All-Stars in 2018.