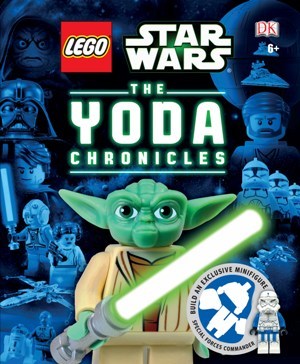 LEGO Star Wars: The Yoda Chronicles, later rebranded as The New Yoda Chronicles, is a series of CGI Star Wars specials that took place towards the beginning of The Clone Wars and later between A New Hope and The Empire Strikes Back, with the characters depicted as LEGO minifigures. Given their parodic nature, they were labeled Infinites-level canon (basically non-canon) pre-reboot, but other than the humor and certain changes, they still stuck to the established canon for the most part.
Advertisement:

The first few LEGO Star Wars specials weren't labeled as "The Yoda Chronicles" but seemingly are part of the series as they keep some continuity among each other. "The Empire Strikes Out" is a little more ambiguous, although it obviously takes place during the New Yoda Chronicles' time frame.