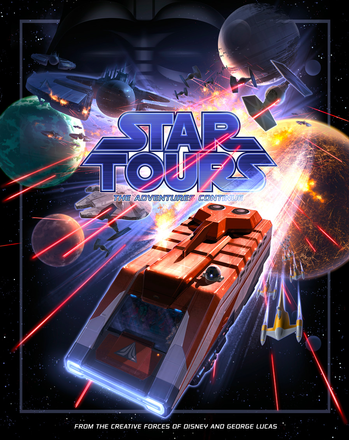 In 1987, Star Tours opened in Disneyland, California, replacing Adventures Through Inner Space in Tomorrowland (Walt Disney World near Orlando, Florida later got their own version of the ride upon the opening of the Disney-MGM Studios Theme Park (now Disney's Hollywood Studios). It is the first-ever Star Wars theme park attraction and was the first major creative partnership between Disney and Lucasfilm, serving as as one of many steps toward The Walt Disney Company eventually acquiring Lucasfilm.

The premise for the ride is fairly simple: set shortly after the events of Return of the Jedi, the travel company known as Star Tours presented an opportunity to take guests across the galaxy far, far away. Passengers climbed aboard a Starspeeder 3000 piloted by rookie droid Captain RX-24 "Rex" (voiced by Paul Reubens), as a seemingly peaceful flight to Endor leads to a galactic misadventure that takes guests into the interior of the Star Tours, past Endor and into the depth of an ice comet, and right in the middle of a tense battle between the Rebel Alliance and the remnants of the Galactic Empire during a battle to destroy the Death Star III. Instead of being a conventional roller coaster, Star Tours made use of hydraulic flight simulators to create the experience of being in a real starship. This ride ran from 1987 to 2016 across various Disney parks, including Disneyland, Tokyo Disneyland, Disney World (in Disney's Hollywood Studios), and Disneyland Paris.

Starting in 2011, Disney phased out the original Star Tours with its sequel Star Tours: The Adventures Continue, a new attraction making using much of the same technology and taking advantage of decades of improvement to it, including integrating 3D visuals. It features a similar premise of an interstellar tour flight gone wrong, but the story now takes place between the prequel and original trilogy films (or during the events of the sequel trilogy films, depending on which era your tour winds up in). A much more competent pilot, AC-38, is set to take guests on their journey with R2-D2, but C-3PO is hired to inspect the cockpit of the Starspeeder 1000. Thanks to a strange turn of events, C-3PO and R2-D2 are forced take over the flight, where they quickly learn that a Rebel/Resistance spy is on their flight, and that they must transport them to safety. After a run-in with the Empire/First Order, the droids take their chances by blasting off to different planets as guests experience an adventure out of this world.

The Adventures Continue is unique in that it has a branching storyline, with a total of 96 different combinations of ride sequences, allowing for a different experience almost every time. Riders will travel through some combination of two worlds: Tatooine, Kashyyyk, Hoth, Jakku, or Kef Bir for the first visit, and Naboo, Geonosis (plus the Death Star), Coruscant, Crait, or Exegol for the second visit. Between 2015 and 2019, Disney added four new worlds tied to the sequel trilogy films, and Disney Imagineers have hinted that more worlds could be added to the experience over time. While Captain Rex was removed from the pilot's seat in this version, he hasn't been forgotten, and he has instead been incorporated him into the queue of the ride, along with later being given something of a comeback at Star Wars: Galaxy's Edge.

Tropes relating to the original Star Tours include:

Tropes relating to the Star Tours: The Adventures Continue include:

The safety video for the original "Star Tours" ride is done as an in-universe flight safety video, with cameos from different aliens in the Star Wars universe.

Example of:
"No Talking or Phones" Warning

The safety video for the original "Star Tours" ride is done as an in-universe flight safety video, with cameos from different aliens in the Star Wars universe.