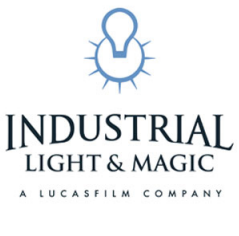 Bright in every sense of the word.
Advertisement:

In 1975, George Lucas was working on pre-production for his next major project, Star Wars. His vision was ambitious, and he wanted top-notch visual effects for it. Shopping around at miscelleneous special-effects houses, Lucas found that no one could offer him the dedication he wanted and a vision to match his own. So he started his own special-effects studio with some of his old college buddies.

With Star Wars, they changed the way special effects were approached. One of their biggest innovations was using computer-programmed cameras that would move around the models and then mimic the same movements whilst in another environment. This would give them space battles that were fast and with effects that made you feel as if you were there. Early on the unions tried to get on the inside of the company and get others employed there, but when the crew demonstrated their home-made computer-controlled camera it became clear no one else in the business knew how to do what they were doing.

Ever since, the studio has been on the cutting edge of special effects for movies, television shows and commercials. The odds are if you see a movie with intensive, elaborate and impressive special effects, ILM was involved with it. They've also helped push the bleeding edge of computer graphics, particularly the use of extensive Chroma Key; 90% of the "sets" in the Star Wars prequels were CGI, and you'd never know it. Pixar itself began as a department of ILM.

As of October 2012, they're under the management

of Disney after its acquisition of Lucasfilm. Since then, they've been involved in more Disney-related movie productions than before.

They were also responsible for several noteworthy commercials for Coke, Energizer, Burger King and Nike among others (including the Japanese Pepsiman commercials), the 1990's General Cinema "Candy Band" and policy trailers (before the company went bust and was acquired by AMC)note they also did this policy trailer

for the same theater chain. and through Word of God, provided the visuals to DreamWorks' Vanity Plate.