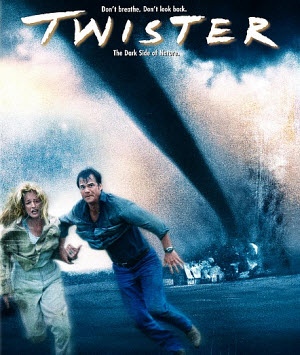 Don't breathe. Don't look back. The tornado's vision is based on movement.
"When you used to tell me that you chase tornadoes, deep down I thought it was just a metaphor."
— Melissa
Advertisement:

Directed by Jan de Bont (Speed) and released in 1996 at the dawn of the Disaster Movie revival, Twister tells the story of a Ragtag Bunch of Misfits who chase tornadoes for a living.

The main duo are scientist Dr. Jo Harding (Helen Hunt) and her former husband Bill Harding (Bill Paxton). Among the many others is Dr. Melissa Reeves (Jami Gertz), Harding's current fiancée, who would provide a Love Triangle if she ever showed a fraction of affection towards Bill. Also a tale of vengeance against the evil tornadoes that killed Jo's father. Also a rival team of tornado chasers led by villainous Dr. Jonas Miller (Cary Elwes) that seek to beat Our Heroes to the punch at a scientific breakthrough.

Twister was also the first film ever released on DVD. It was released on the format on March 25, 1997note A rare pre-digital-download era instance of a film not following the standard "release window", coming out on DVD just two weeks before Twister made its pay-cable debut on HBO (at the time, a film's home video and pay-per-view windows normally overlapped, while its premium cable premiere occurred on average of four to six months after its initial home video release) (the second title, Blade Runner, came out the next day). Coincidentally, it was also the last film put out on HD DVD in The United States (though the very last HD DVD worldwide was a German release of Death Proof). It was also one of the first movies released on Blu-ray.

While it has since been closed, the movie was popular enough to inspire its own attraction at Universal Studios Florida, titled Twister...Ride it Out.

Not to be confused with the party game, novel, or the other film from 1989 with the same name, which happens to be a comedy.

"If you're too stupid to realize that your two-for-one sale locks will give out, and you'll be leaving your wife-and-daughter husband-and-fatherless, you just might be... a poorly written character."