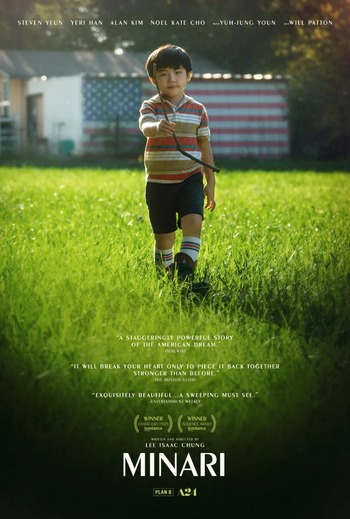 "Remember what we said when we got married? That we'd move to America and save each other? Instead of saving each other, all we did was fight."
— Jacob
Advertisement:

Minari is a 2020 dramedy written and directed by Lee Isaac Chung.

It is a semi-autobiographical take take on Chung's childhood growing up on a farm in Arkansas. The story is set in the 1980s and follows Korean-Americans Jacob and Monica Yi (Steven Yeun and Han Ye-ri), who have come to Arkansas along with their children Anne and David. After years working in California sexing chickens, Jacob grew weary of being a wage slave and moved the family to Arkansas, where they could start a farm growing Korean produce. Monica is extremely skeptical about this plan; she generally hates living in rural redneck Arkansas, and she's specifically worried about David, who has a heart murmur. She wants to go back, but Jacob insists that they stay, and pursue their piece of the American Dream.

Will Patton plays Paul, a rather odd fellow who lives in the area and befriends the Yi family.