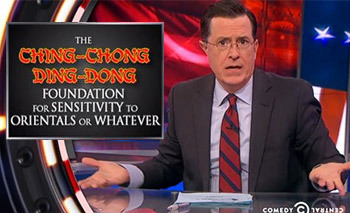 Ching chong ching chong chong, ching chang chong.
"Ching, Chong, Oh Mister Ching Chong,
You are the king of Chinatown.
Ching Chong, I love your sing-song,
When you have turned the lights all down."
— "Ching Chong", by Lee S. Roberts and J. Will Callahan
Advertisement:

A Stock Phrase used by non-Asians to be racist against the Chinese, and, due to Interchangeable Asian Cultures, other Asians as well. Not to be confused with Ching-Chang-Chong, the usual German name of the game Rock–Paper–Scissors.note Incidentally, one of the Cantonese names for the game 猜程尋 is pronounced like "chai ching chum".

Naturally, since the phrase is a racist insult, this is largely seen as a Discredited Trope, unless if used in a Dude, Not Funny! context. In fact, a lot of Asian-Americans consider this to be on par with the N-word. Subtrope of As Long as It Sounds Foreign for the Chinese language. See also El Spanish "-o", for the arguably Spanish equivalent of this trope.