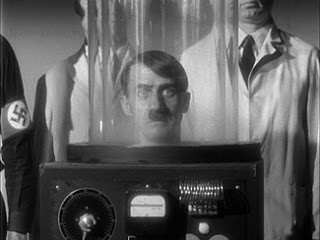 Nazi Science SNEERS at the boundary between life and death!
"Mr. Vollmer, I was making speeches before you could read them. I was fighting battles when your only struggle was to climb out of a womb. I was taking over the world when your universe was a crib! And as for being in darkness, Mr. Vollmer, I INVENTED darkness!"
— Adolf Hitler, from The Twilight Zone (1959) episode "He's Alive"
Advertisement:

Think of evil. Not Saturday Morning Cartoon evil, or Hollywood Blockbuster evil, but festering, seething, irredeemable evil. Who do you think of?

Why, Adolf Hitler, of course!

Orchestrator of genocide, enemy of the free world, and a really, really bad artist to boot. Thank goodness he killed himself in that bunker back in 1945, right? Right?

...Because if he somehow came back, we'd all be screwed.

Maybe there's some nutjob who hasn't given up on the idea of the Third Reich, the Aryan Nation, the Thule Society, or any one of the other things Hitler had a hand in, or maybe they're just doing it For the Evulz, but bringing back Hitler for the express purpose of having him take over the world is a recurring villainous plot in fiction, and is often treated as synonymous with opening the gates of Hell and letting Satan and his minions run free or summoning down one of H. P. Lovecraft's many Eldritch Abominations to destroy the minds of all mankind — that is, The End of the World as We Know It.

Of course, in reality, Hitler was a mere mortal rather than the very spirit of evil given human form, and bringing him back from the dead would in all likelihood not make The Legions of Hell Take Over the World. As a matter of fact, the reason why an Inglourious Basterds-type situation didn't happen in reality is because the Allies realized that Hitler's incompetent leadership was practically winning the war for them.

On a practical level, cloning Hitler (a favorite method) would likely result in a completely different person who just so happened to look like Hitler. And in fact, a man who looked like Hitler would probably have less of a chance to end up in a position of power in today's world than just about anyone else. Though to be fair, most people probably wouldn't even recognize Hitler without the 'stache. We Didn't Start the Führer, meanwhile, is a better way to justify this trope by making Hitler a literal force of evil rather than rolling with the ironic premise that it's something in the genes.