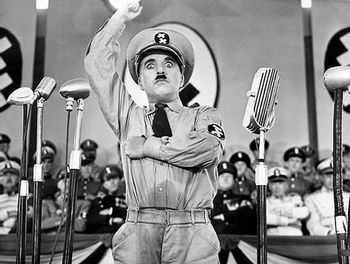 Heilarious!
"If you stand on a soapbox and trade rhetoric with a dictator, you never win. That's what they do so well: they seduce people. But if you ridicule them, bring them down with laughter, they can't win. You show how crazy they are."
— Mel Brooks
Advertisement:

In short: Adolf Hitler is treated as a joke instead of a monster.

No, this doesn't intend to excuse or underplay anything done under his regime. The point is that instead of being treated as some kind of boogeyman or evil incarnate, he's treated as something stupid, for reasons stated in the above quote. Focus is often put on Hitler's actual personality and behavior outside German propaganda - that he was a short, somewhat goofy-looking man prone to hysterics and narcissism, the opposite of the image he tried to portray to his supporters.

This was the most common portrayal of Hitler (and Nazis as a whole) in most anti-Nazi media before and during World War II. German atrocities in eastern Europe, which were dismissed as Communist propaganda elsewhere, made this portrayal a little more controversial there. After the Western world became fully aware of The Holocaust in the late 1960s and 1970s, it became more common to portray Hitler as the ultimate manifestation of evil rather than a foolish clown. This is because some people think that making fun of the Nazis makes the war crimes and genocides they perpetrated seem less serious. Thus treating Hitler and the Nazis too flippantly may evoke reactions of "Dude, Not Funny!" Still, many people subscribe to Mel Brooks' view that the Nazis' evilness itself qualifies them as Acceptable Targets.

A Sub-Trope of Those Wacky Nazis (with actual emphasis on the "wacky") and Historical Hilarity. Compare Stupid Jetpack Hitler.