All spoilers for Mobile Suit Gundam and Mobile Suit Zeta Gundam are unmarked. You Have Been Warned! 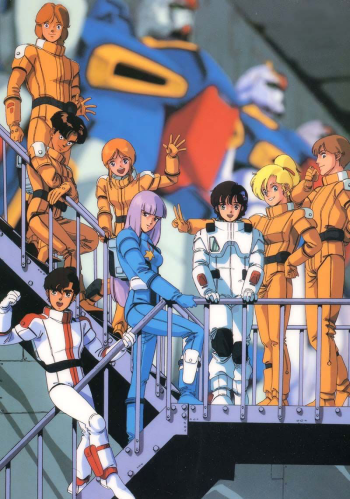 Mobile Suit Gundam ZZ (Kidou Senshi Gundam Double Zeta), is the third series in the highly successful Gundam anime franchise. A direct sequel to the vastly popular Zeta Gundam, Gundam ZZ marks a major departure from the tone of its predecessor, despite being (unusually for a Gundam series) a direct sequel.

With the resolution of the Gryps Conflict, the Titans have finally been defeated, but the AEUG was badly battered in the process. In the aftermath, Haman Karn's Neo-Zeon movement is the strongest force in space by virtue of having sat out the worst of the fighting in the previous conflict, and as such, she decides that it is time for Zeon to rise again, forcing the weakened Earth to have to fight the now restarted One Years War.

As a result of the damage suffered in the final battle of the Gryps Conflict, and being pursued by Neo-Zeon forces, the surviving crew of the Argama is forced to seek shelter in the Side 1 Colony of Shangri-La. There, a small band of children who scrape by on salvaging war debris notice the landing, and decide to try stealing a mobile suit so they can sell it for scrap. While this is going on, a surviving Titan and a Neo-Zeon ship attack, forcing Judau Ashta, a member of the salvage gang, to take over for the non-functional Kamille as the pilot of the Zeta Gundam to keep the fighting from destroying the colony.

Picking up mere days after the conclusion of Zeta Gundam, Gundam ZZ's first half is rather light-hearted and generally upbeat, especially after Zeta's Darker and Edgier story. According to reliable reports, it was an attempt to restore Gundam's reputation as a children's series and family entertainment, and its director Yoshiyuki Tomino is said to have made it as a reaction against the incredibly bleak ending of Zeta Gundam.

However, the series eventually undergoes Cerebus Syndrome and becomes much more serious. This is at least in part due to the fact that, partway through the production of ZZ, Tomino received permission to make Char's Counterattack, thus necessitating major changes in the plotline of ZZ. The series eventually ends in typical Gundam style, though without repeating the ending of Zeta Gundam.

Gundam ZZ was also one of the mainstay titles of the UC Gundams when it comes to Super Robot Wars, though after a while it faded from prominence, disappearing from the "regular" roster after Alpha 3. During the announcement of Super Robot Wars Z2, Terada let it slip that Bandai and Sunrise have something big in mind for ZZ, but what exactly this meant wasn't known. As it turned out, ZZ made its triumphant return in Super Robot Wars OE (though with OE's episodic nature, ZZ only joins in near the middle), letting the SRW fans know it still had a place in Banpresto's hearts. It later made another comeback in Super Robot Wars V, and more or less returned to its mainstay status for games of the "International Era" (V, X and T).

Gundam ZZ is available on subtitled DVD's from Rightstuf.

This contains examples of: