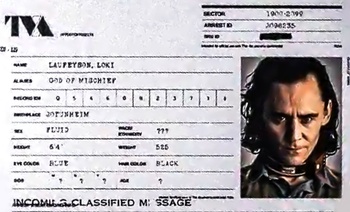 Sometimes the most interesting revelations aren't delivered with a dramatic speech, a round of shocked expressions and a title card reading "to be continued". Sometimes they're just handed out casually, tossed in the audience's face without fanfare or even a helpful sign saying "this is important". In many cases, it's not until Fridge Logic kicks in that the audience has a chance to react.

These are Info Drops, which are to Infodumps what a single stealth paratrooper is to a nuclear warhead.

While rarely relevant to the actual plot, an Info Drop usually fleshes out subtle details of the setting and/or characters, usually nagging questions that will continue to nag the less-attentive. For instance, say a character has Only One Name; there might be an Info Drop where he writes his full name on a check, or perhaps someone calls out his missing surname (or given name), and this is the one and only time it's either seen or referenced. Or perhaps it's never explicitly said when the story takes place, but there is a date that appears somewhere that can be cross-referenced with the events of the story.

Contrast Cryptic Background Reference, where a Noodle Incident is used to add the illusion of depth to the story's background without actually adding any extra detail.