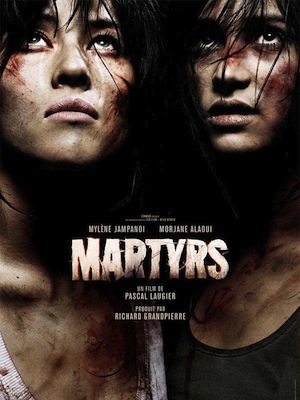 "Martyrs are exceptional people. They survive pain, they survive total deprivation. They bear all the sins of the earth. They give themselves up. They transcend themselves... they are transfigured."
— Mademoiselle
Advertisement:

Martyrs is a 2008 French-Canadian horror film written and directed by Pascal Laugier, starring Morjana Alaoui and Mylène Jampanoï. Due to its pervasive graphic violence and heavy themes, it's a heavily polarizing film often deemed one of the most disturbing of all time, and it's one of the most well-known films associated with the New French Extremity movement.

The story is about Lucie, a torture victim who escapes from her captors. She's sent to an orphanage where she meets and befriends Anna, a fellow child abuse victim. While the police and the media investigated Lucie's predicament, the perpetrators were never caught, so Anna pledges to help Lucie track them down. Fifteen years later, Lucie seizes the chance to have her revenge, and things spiral out of control from there.

The film received an American remake in 2016 from Blumhouse Productions. While the remake is Lighter and Softer than the original film, it's not any easier a watch for the faint of heart.