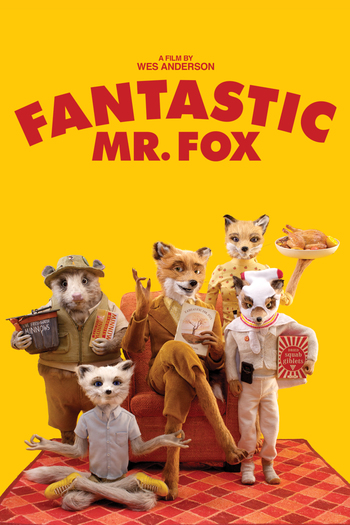 Pose as a team, because cuss just got real
"Boggis, Bunce, and Bean
One fat, one short, one lean.
These horrible crooks,
So different in looks,
Were none the less equally mean!"
Advertisement:

A 2009 animated family film centered upon the eponymous character's attempt to go straight, renouncing his chicken-stealing ways. It was filmed in Stop Motion by director Wes Anderson as his first foray into animation. Including an All-Star Cast, it was reviewed well, containing Anderson's indie mannerism and introspective tone, along with trademark charm and Dysfunctional Family.

Based on the book of the same name by Roald Dahl, but greatly expands upon its premise, focusing upon Mr. Fox's family's dynamic, and the town's attempt to outwit the farmers.

The movie has examples of: