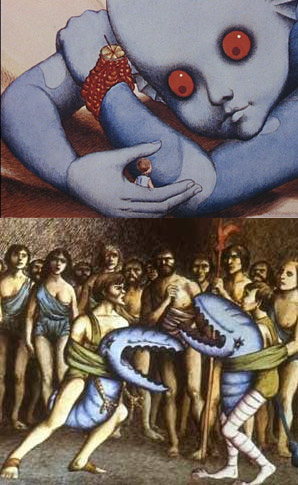 "They also claim that the Oms' ancestors on the ancient planet Terra were quite intelligent. However, as they may have destroyed their entire civilization, I doubt that's correct!"
—Draag Leader
Advertisement:

Fantastic Planet (French title: La Planète Sauvage) is a 1973 Czech/French animated, experimental film. The story is set on Ygam, the alien homeworld of the Draags (or Traags), where humans — known as Oms — exist as both a population of troublesome vermin and also as pets. The film follows a young Om as he is captured by a Draag family and raised by a young girl, who inadvertently teaches him about Draag culture and technology. After escaping from the Draag home, he joins a clan of wild Oms, bringing with him the knowledge to reshape their society and relationship with the Draags.

The film is famous for its imaginative visuals, frank sexuality and overall trippiness.