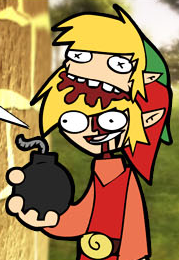 The act of wearing your freshly killed opponent's head on your own. Obviously reserved for the Ax-Crazy types, but a few Sociopathic Hero Villain Protagonists pull it off via Success Through Insanity. Two variants: Wearing the skull as a helmet, or just the skin, as a cowl/mask.
Advertisement:

Of course, the more acceptable version uses an animal's head as a hat. Very popular among shamans. Compare Nemean Skinning, where the slain animal's whole pelt is used as a cape or cowl. See also Skeletons in the Coat Closet.