Web Video / There Will Be Brawl 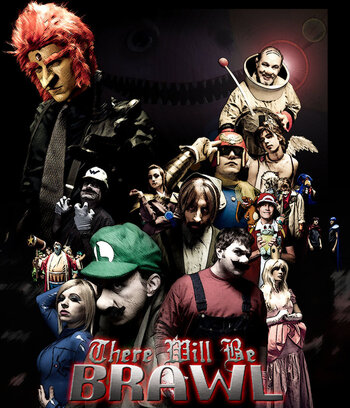 "None of us are the heroes we're supposed to be..."
— Police Chief Link
Advertisement:

In short: Super Smash Bros. meets Sin City as well as Watchmen and The Silence of the Lambs. It has nothing to do with There Will Be Blood, other than borrowing much of its name.

There Will Be Brawl is a webseries that was eventually hosted by The Escapist and was directed by Matthew Mercer. Featuring live actors, it takes the most famous characters from Nintendo's library and puts them in a situation far removed from the bright and cheery childhood games we remember. The plot follows Luigi, who is now a jaded drug dealer trying to make ends meet in the seedy underworld of the Mushroom Kingdom for both himself and his brother. As the plot thickens and new dangers arise, Luigi searches for a reason to keep fighting for a city that seems beyond salvation.

The overall dark tone of the series is accompanied by an engaging plot, good writing and acting, as well as some clever Mythology Gags from all over the Nintendo universe. In addition, the sheer effort put into the costumes, make-up and production design impresses to no end, even though some costumes that required a little extra creativity involved (Kirby, Fox, Dedede etc) can be a tad distracting at first, you can generally get too immersed in the story to notice after a while. The series seemingly aims to be a Deconstruction of Nintendo franchises in general, but often ends up as more of an Affectionate Parody of the plots and mechanics from the respective games.

After the series ended they announced plans of a DVD, but that seems to have gone into Development Hell.

The website for the series has gone down in the years since it finished, but the complete series can still be found here