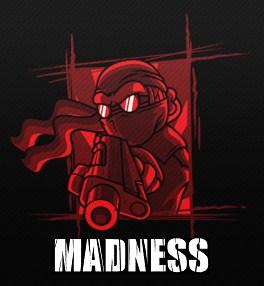 "Just do what comes natural."
Somewhere in Nevada...
Advertisement:

Madness, as defined by the first definition on Dictionary.com: the state of being mad; insanity.

Combat, as defined by the last definition on Dictionary.com: a fight, struggle, or controversy, as between two persons, teams, or ideas.

So, hey, wouldn't it be just NEATO to add them both together in a series of flash animations?! Seems Matt Jolly, AKA "Krinkels" had that very idea one day, and thus created Madness Combat.

The series started off as a somewhat typical old school Newgrounds-type flash, littered with random violence, distasteful portrayals of a character resembling Jesus (also known as "Jebus" after a line from The Simpsons), and the odd as'plosion or two. In essence, the animations are simulated 2.5D shoot-em-ups, played as if on an ultra-violent perfect playthrough speed-run. However, the smooth animation, witty and amusing kills, and unique art style made the series an instant hit, and the newfound fandom begged for more.

As more episodes were added, a subtle storyline slowly developed, though what it all means is one of the most heavily disputed subjects in the fandom. At its very base, the story is something like this: the protagonist ("Hank J. Wimbleton") wants to assassinate The Sheriff for some reason or another. And he's willing to kill countless random goons to do so. He enters the Sheriff's building of operation, slaughters everyone in sight, but is anticlimactically shot in the head by Jebus, who seems to be the Sheriff's right hand man.

Hank is then brought back to life somehow, and tries his hit on The Sheriff again, who seems to be very willing to hit the big red button on the "Improbability Drive" and send the world into chaos, just to save his own skin. Hank ends up dying again, although he takes Jebus and The Sheriff with him. Oh, and an Insane Zombie clown works his way into this mess somehow.

The later episodes tend to revolve around Hank attempting to kill Jebus and The Zombie Clown With Super Powers ("Tricky"), for some unknown reason. Matrix-inspired fights, ludicrously violent deaths, non-sequitur like moments and a much darker feel follow the latter part of the series. All because of the Improbability Drive, and its insane effects on everyone and everything. Or something like that. Yes, it's all that vague, though all three major characters appear to have been killed permanently. That is, until two NEW protagonists revive Hank.

The story is generally felt to be one of interpretation, allowing the viewer to decide just what the hell is going on.

It should be noted that aside from the "official" series by Krinkels, there are a multitude of animations featuring the art style and cast of the Madness series by other creators. Newgrounds has even hosted the annual "Madness Day"; wherein the front page is dedicated to these fan videos a la "Pico Day". (Though unlike Pico, which has Negative Continuity and its fan videos can be anything, Madness Combat has its own established continuity and its fan videos are just that. Although some fans do go out of their own way to make their own series out of it.) Madness Day happens every September 22nd.

Matt Jolly has teamed up with Michael Swain of Blockhead and Mastermind fame to create Madness: Project Nexus

, a flash game that is meant to give the player a feeling of being in the animations themselves. A 3D video game sequel eventually came out.

Example of:
The Man Behind the Man