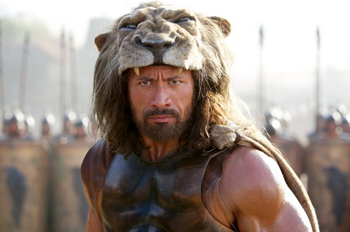 Mankind's first hoodie.
Professor: According to legend, Hercules, at eighteen, went alone into the woods and killed the Thespian Lion... and for the rest of his life, he wore its skin.
Hellboy: So you're telling me that kid was the ghost of his pants?
Professor Bruttenholm: Cloak, Hellboy. He wore its skin as a cloak.
— Hellboy, "The Hydra and The Lion"
Advertisement:

So, your hero has managed to showcase his woodland prowess felling a powerful woodlands creature with naught but a pointy stick, a bit of dental floss and gum. What better way to show his superiority over nature than to show him fully clothed in animal skin attire? Especially manly characters will wear the entire open-mouthed head of the animal as a hood, as in the page picture.

In Real Life, this would be a complicated process. note Tanning the leather (for the curious, converting a fresh animal skin into usable leather,

especially in medieval and classical times, was an extremely long and labor-intensive process — we're talking months of work here, involving noxious and smelly chemicals like quicklime, animal brains, urine, etc.), cutting it, and then sewing it back into a wearable suit. However, you're not likely to see this in an action based series because it's time consuming and not as fun to watch as the slaying of the creature. Despite all this, the trope is used because it's just that cool.

If it's in a tundra or very cold environment, expect this to be used to justify his survival in this environment.

If portrayed realistically, it serves as an example of good survival skills (trained hunters know how to skin and butcher a downed large animal in a few hours' span with only their knives) and (if the hunter is stranded in the wild) his adaptation to his new environment.

The trope namer is the Nemean Lion slain by Heracles.

Can also overlap with Pelts of the Barbarian and with Head Hat. Compare Carcass Sleeping Bag, for when you don't have access to magical tanning skills. Also compare Animal Disguise, which may be made of an actual animal skin.