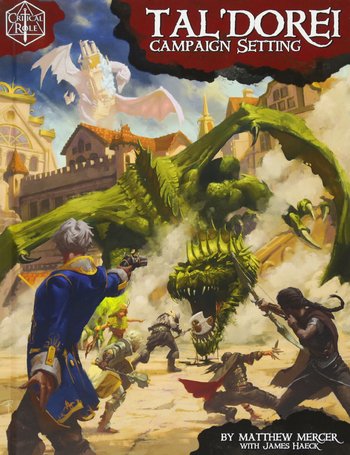 Critical Role: Tal'Dorei Campaign Setting is a 2017 book written by Matthew Mercer and James Haeck to help fans of the Dungeons & Dragons-stream Critical Role run their own D&D games in the world Mercer created for that stream. More briefly, it's The Book of The Stream of The Game.

The book details just about everything that Critical Role mentions about Tal'Dorei, the fictional continent the first campaign is set on. It's a place with the dwarves and elves typical of fantasy settings in addition to incredibly dangerous firearms and a Divine Gate which keeps gods from solving every problem. It details mythic battles that shaped the world, powerful organizations and governments eager to hire adventurers, gods that remain nameless for legal reasons, and some sub-class options and magic items for D&D players more interested in doing a lot of fake damage than fake history.

A lot of it details lore you'd never know after watching all 340 hours of Critical Role, but some of the characters and events described in the book are basically summaries of their appearances on Critical Role up to episode 94, so prepare to get spoiled if you haven't seen the show.

Tal'Dorei Campaign Setting Reborn, a revised and expanded version of the book. It was released on January 18th 2022.