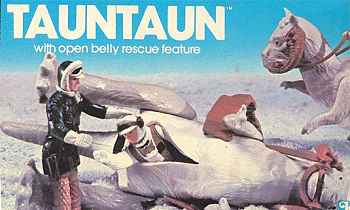 What's the internal temperature of a tauntaun? Luke-warm!
"And I thought they smelled bad... on the outside!"
— Han Solo, Star Wars: The Empire Strikes Back
Advertisement:

An explorer is lost in the wilderness. He knows he's not far from shelter, but there's a snowstorm blowing up and it will soon be too dark to see. His packmule is shivering and clearly on its last legs. He has no immediate shelter, no way to make a fire... and he realizes that there is only one possible course of action.

He shoots his poor mule, cuts open her abdomen, and crawls into her body cavity, hoping the heat and shelter she offers will be enough to get him through the night... or at least, until he can be rescued.