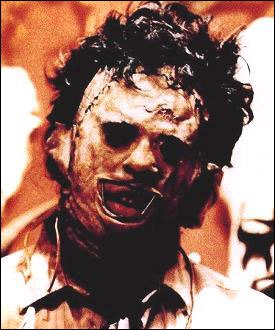 Despite the name, that's not leather on his face...note At least, not the type of "leather" that we know, anyway.
"He's making himself a 'woman suit', Mr. Crawford — out of real women! And he can sew, this guy, he's really skilled. A dressmaker, or a tailor... that's why they're all so big — because he needs a lot of skin. He keeps them alive to starve them a while, to loosen their skin..."
— Clarice Starling, The Silence of the Lambs
Advertisement:

Some people are a bit bent in the head. These people are often living incarnation of Nightmare Fuel in any case, but the best... well... if best is the word to use here... perhaps "most effective" methods of making them even Squickier than they already are is to have them skin their victims and then use the collected skin for some disgusting purpose.

The possibilities are horrific to contemplate, but include masks, clothing, lampshades, binding on a Tome of Eldritch Lore (bonus points if the book is also written in blood), and so on.