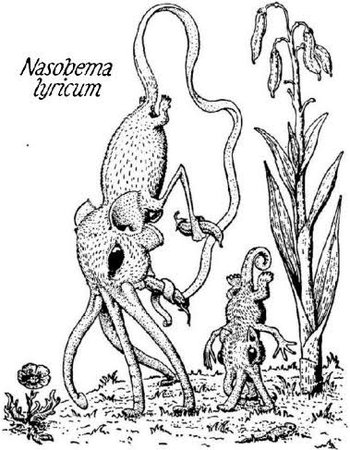 It's all fun and games until a little critter gets a bit nosey.
"The sheer number of creature possibilities is staggering, and it's impressive how you can give them eighteen legs and seven eyebrows and it'll still somehow find a way to walk and make suggestive poses."
— Zero Punctuation on Spore
Advertisement:

Thousands of species of Real Life organism move by walking, swimming, or flying with wings. Most Speculative Fiction species do the same. But whether to showcase the physical demands of a creature's unusual habitat, to prove it can be done, or merely to make them stand out in a crowd, writers sometimes dream up truly weird ways for their creations to get from point A to point B. Wheels are a common example, possibly for the sheer absurdity of the image.

This trope is not intended for teleportation, plane shifting, and other means of travel that break the laws of physics. (Bending those laws is acceptable, however.) Bizarre technological methods of locomotion belong under the various vehicular tropes.

Subtrope of Bizarre Alien Biology. Supertrope of Heli-Critter. Sister trope to Bizarre Alien Limbs, when that trope is about legs. Usually applies to a Living Gasbag. Compare Rolling Attack.