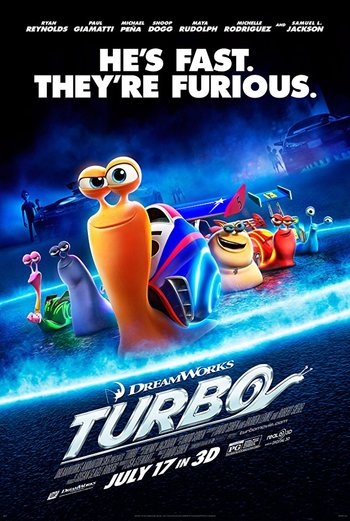 Slo mo no mo.
"I wish I was fast."
— Turbo
Advertisement:

Turbo is a 2013 DreamWorks Animation CG family film that revolves around a garden snail, Turbo (Ryan Reynolds), who dreams about becoming fast so that he can race like his Indianapolis 500 idol, Guy Gagne (Bill Hader). His dreams make him a little distant from his slow-paced snail society, which includes his careful brother Chet (Paul Giamatti), who is constantly putting up with the embarrassment Turbo brings into his life. As luck would have it, a freak accident causes Turbo to get just what he's asking for when nitrous oxide becomes infused in his DNA. This causes him to become a snail racing wonder, and the possibility of competing in the Indianapolis 500 is just within his grasp.

The film was directed by David Soren, who was a story artist for several other DreamWorks movies, as well as the head of story for Shark Tale. Watch the first trailer here

Before the film even aired, a Flash-animated television series entitled Turbo F.A.S.T. (Fast Action Stunt Team) was announced to begin airing on Netflix in December 2013. The first season's episodes were released in blocks of about five episodes at a time every three months from December 24, 2013 to December 1, 2014; season two starting July 31, 2015; and season three started on February 5, 2016. The series is animated by Titmouse, who previously did another Flash-animated series involving high-speed action, Motorcity. It ended up being the first in a long string of Dreamworks spin-offs on the Netflix platform.