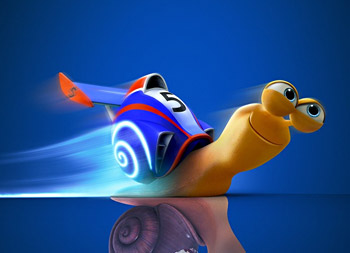 Whoa! That snail is fast!
Dexter: You realize that for a turtle, that's very fast.
Dee Dee: He's not a turtle. He's a birdie.
— Discussion on a turtle moving at nine miles per hour just before the turtle starts running at 60 mph, Dexter's Laboratory
Advertisement:

Many animals have a reputation for being incredibly slow in terms of land-based or water-based locomotion. But what if they were able to move much faster? Either through some mechanical means, or because they just can, this animal is far faster than normal. Despite the trope name, it is not limited to snails; other animals noted for being slow, particularly turtles and sloths, are also often portrayed this way.

Subtrope to Faster Than They Look, limited to animals. A Subverted Trope of Animal Stereotypes, as it plays with the audience's expectation of the animal being slow.