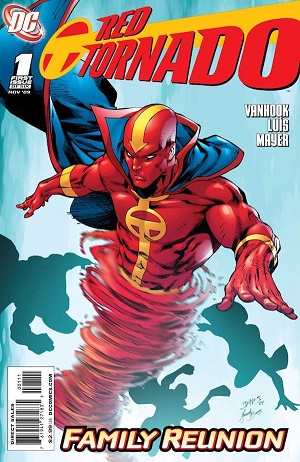 Yes, there is red and a tornado
Kid: Hey, it's Black Falcon!
Sam Wilson: Just Falcon, kid.
Kid: No, no, my daddy told me it's Black Falcon.
Sam: Is it because I'm black and I'm the Falcon? [...] So are you, like, Black Kid?
— The Falcon and the Winter Soldier
Advertisement:

A superhero and masked hero naming convention where the hero has a color as part of their name.

Generally, this color is incorporated into their powers, their appearance, or their costume in some way. Expect it to be pointed out if it isn't. Most names of this type take the form of Color Noun.

A Sister Trope to Something Person, where the hero or villain has his power or defining trait as part of his code name. May or may not be Color-Coded for Your Convenience. Wanders into Added Alliterative Appeal on occasion.

Different colors tend to signify different things. A few of these characters are from the Cold War era and are colored red because they come from, or represent, a communist nation. Black can indicate a Captain Ethnic or an Anti-Hero.

Spectrum
A form of Theme Naming when most or all of the cast is named after colors.