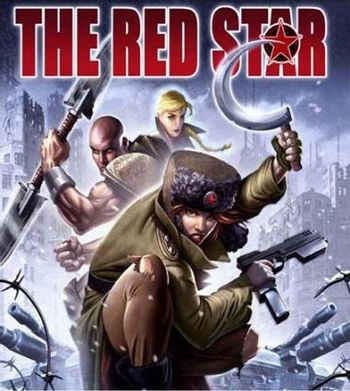 The Red Star is a 3D Side View Beat 'em Up game, loosely based on a Graphic Novel by Christian Gossett, which takes place in an alternative future Soviet Union where there's magic. It was originally slated for a 2004 release on the PlayStation 2 and Xbox, though following its publisher's bankruptcy it would only see release on the PS2 in 2007. In 2010, it was also ported to PlayStation Portable (lacking multiplayer in this version) and iOS.

The game at first appears to be a 3D Contra-ish game with Beat 'em Up elements, but then you reach the first mini-boss. The camera changes to an overhead view, and you suddenly get bullet patterns fired at you. This happens for about nine out of ten bosses in the game, with up to five bosses per stage for 19 stages.

The Red Star was the last game developed by Acclaim before its first bankruptcy. It was eventually published by XS Games, one of Zenimax Media's (Bethesda Softworks' parent company) budget game publishing labels.