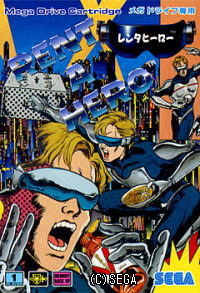 Cover of the 1991 title
Rent A Hero is an Action-Adventure with slight Beat 'em Up elements made by Sega's AM2 division in 1991 for Sega Genesis. It starred an ordinary boy, Taro Yamada (his default name), who one day phoned to a cafeteria and was given by the delivery man a battery-powered super suit. He wore it thinking it was just a funny costume... but when he discovered it gave him actual Super Strength and other nifty gadgets, he decided to become a Rent A Hero, a local superhero for hire employed by an agency named SECA. Now Taro/Hero goes around the districts of Aero City helping the citizens, with mundane tasks like delivering food or finding missing children, but later on more intensive missions involving corporate theft, counterfeit money and The Mafia.
Advertisement:

The game is an Affectionate Parody of Sega, a decade before Segagaga, but also of Sentai, American superheroes and Japan's culture and society between the 80s and the 90s. Because of this, it was never released in English, and its many cultural references made it so that it never received a complete Fan Translation until 2015, when one was finally released on the Romhacking.net site.

A remake, called Rent A Hero No. 1, was released for Dreamcast in 2000, receiving an upgrade from top-down and side-scrolling (for the battle sections) pixel graphics to a free-roaming 3D polygonal world not unlike Shenmue (made by AM2 as well), but keeping its quirky and humorous tone and adding even more cameos and nods to several Sega properties.

This time the game was supposed to receive a English release, and it was supposed to come out for the North American XBox in 2004. Unfortunately, though, a development delay resulted in a sharp decrease of retail orders, so the release was indefinitely postponed... and then the American publisher was shut down by the parent company. The almost fully-translated English release was even reviewed by some sites, though, and it can be found nowadays in some corners of the internet.

Most of the tropes listed use names found in the fan translation of the Genesis game unless noted.

The game and its remake provide examples of: