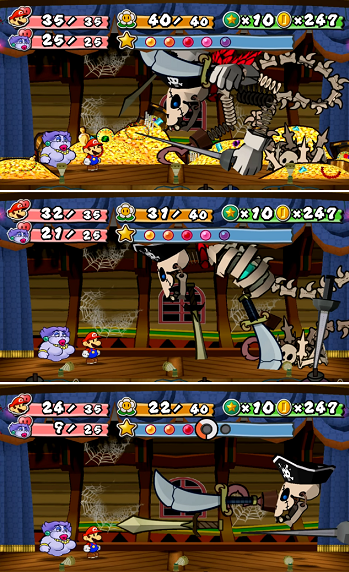 Multiple large-scale fights in a row. Most common with a boss who morphs in shape (where multiple areas must be disabled to do real damage on the controlling target, see also: One-Winged Angel), although it sometimes happens with separate bosses. The game may or may not be nice enough to replenish your health in between the fights, but a major danger is using important items or techniques too early in the fight. With sequential bosses that are multiple fights against the same creature, occasionally the game will try to trick you into thinking that the first fight was the only one, showing victory animations and so on.

This trope is VERY common with a final boss. The number of stages will often be three.

If you're fighting multiple bosses at the same time, then that's a different story. Needless to say, Crystal Dragon Jesus help you if you have Sequential Dual Bosses, though those are blessedly rare for now...

Compare Boss Rush when fighting more than one past enemy in a sequential order and Boss Bonanza when there is a high amount of new bosses in a row. Compare Turns Red.