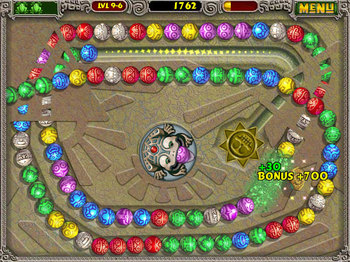 Zuma is a 2003 Aztec-themed computer game, in which the player controls a stone frog capable of rotating 360 degrees and spitting out colored stone marbles. A continuous string of marbles (a "rollout") is pushed down a meandering trench; at the end of the trench is a skull-shaped opening, and if even one marble falls in the hole, the player loses a life. To prevent this, marbles are fired from the frog at the rollout so as to match three or more of the same color; these will explode. When enough points have been scored, new marbles stop rolling onto the screen, and once all the marbles are removed, the level is cleared.

Knocking out marbles within a rollout will give you a brief respite as the back of the line closes the gap. However, if the marbles on either side of the gap are the same color, the front of the line will zip backwards, pushing the whole rollout back a little bit. Furthermore, if three-or-more same-colored marbles join this way, they explode too, and it's possible, with planning (or more likely luck), to create cascading chains of matches this way. Certain marbles will have icons on them denoting powerups (slowing the chain, briefly reversing the flow, etc), and on occasion there will be pop-up items outside of the string that give you points, extra lives, etc if you manage to shoot them. Finally, if the map allows it (and most do), you can get extra points in the form of "gap bonuses": open a hole in one rollout and then successfully shoot something that is on the other side of the hole (the other string, a pop-up item, etc).

A sequel, Zuma's Revenge!, was released in September '09. This one was a little different; instead of the Mayincatec style of the first game, Revenge! was Polynesian-styled, introduced new powers like Eye Beams, Triple shot, and the ability to switch between pedestals to shoot from, and had something strange for this style of game — bosses based on Tiki gods.

A Facebook version was also created, called Zuma Blitz. It adds the ability to check your friends' scores (and compete with them), and centers the formula around this form of "multiplayer" competition by putting a 1-minute time limit on each match. (This is short enough that you almost never die.) There's only one native power-up marble — an hourglass that adds 5 seconds to your current match — but at the end of each match you get "Mojo," a form of currency which can be expended to add up to three Powers to your match (Bomb marbles; more extra-point pop-ups, etc). At the end of each week-long tournament round, you get Mojo prizes if you had one of the top 3 high scores amongst your Friends list. This game has been retired as of March 31, 2017.

It's Older Than They Think, being based off an old arcade game called Puzz Loop released in 1998 by Mitchell Corporation (which was released outside Japan as Ballistic on PlayStation, Game Boy Color, and Nuon DVD), which spawned a handful of sequels (including a Nintendo DS port). There is also a competing title by Mumbo Jumbo called Luxor.