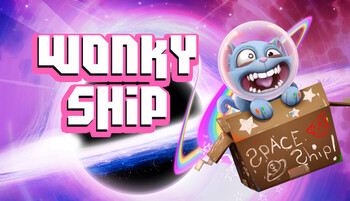 Wonky Ship is a free-to-play mobile game developed by Kiz Studios. You play as an intergalactic pilot near the edge of a black hole, and must dodge asteroids, remain within the screen, and score points by doing flips.

The game has sixteen ships to pilot, but only the Wnk-y Shippienote not pictured in the page image, which actually depicts the Scrub-in-a-Box is playable from the start. Your scores are converted into coins that you can spend to buy powerups and ships.

You can download the game on the App Store

. The game has also been ported to Steam