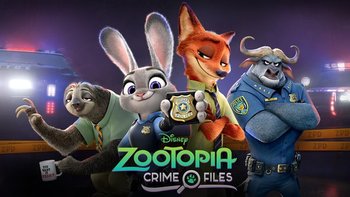 "An un-fur-gettable hidden object adventure!"
Judy: I'm a romantic at heart, I'd be happy to help.
Nick: And I'm a cynic at heart, but Officer Hopps has the car keys...
Advertisement:

Zootopia: Crime Files (also known as Zootropolis: Crime Files in certain regions) is a Hidden Object Game based on the Disney Animated Canon film Zootopia. It was released on iOS, Android and Windows on August 17, 2016.