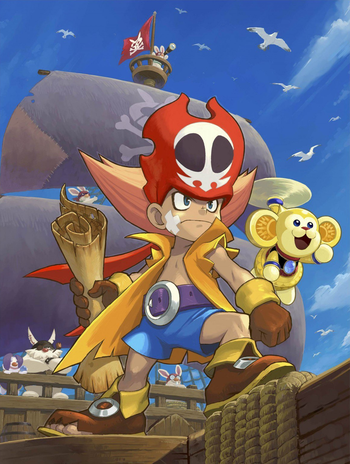 Zack & Wiki: Quest for Barbaros' Treasure is an Adventure Game released for the Nintendo Wii by Capcom in the year 2007; it was later released for the Wii U as a download title. The main characters of this title are:

The plot, in a nutshell, is as follows: Zack, Wiki, and their pirate friends hear about a great treasure on a previously-uncharted island. Zack and Wiki find the treasure, a golden skull, which turns out to be Barbaros. Through the skull, Barbaros tells the duo that he will reveal the hiding spot of his vast fortune if they can find the rest of his now-golden skeleton and break the curse. Zack and Wiki accept this offer and travel across the island, solving a multitude of puzzles in order to collect the various pieces they're searching for. Most of these puzzles are solved by Wiki, who can magically transform enemies into items while in bell-form.

By the way, you'll probably die. A lot. In a number of ways that could put Dragon's Lair to shame.

While the cel-shaded graphics look cute, this is NOT a game that young children can beat easily.