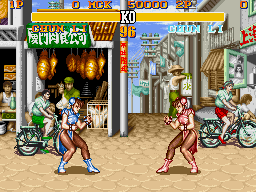 "We have met the enemy, and it is us."
Dark Pit: I just don't like the idea of someone copying my act.
Pit: What? But you're a copy of me!
Dark Pit: Come on, now, think about it. If I was a copy, why would I kick my own butt?
— Kid Icarus: Uprising
Advertisement:

"Nice to meet you, another myself."

A term that originates from fighting games, a Mirror Match occurs when one character fights against themselves, usually as a result of two players choosing the same character (where, normally, each character on the roster is implicitly a unique individual). This can be a rather tricky experience as the two characters are, by definition, evenly matched, and victory will rest on which player is better at using the character's skills. Typically the two players will be distinguished by color with the second player as a Palette Swap of the character's original design or having a variant skin.

When these occur in the game's story mode, they're usually Hand Waved as a mysterious impostor and tend to have no impact on the story despite the interesting possibilities they present. Most characters fighting their mirror selves never seem to notice, nor is it explained how such a thing is possible, though it may be lampshaded if the game features pre- or post-match banter.

The Trope Namer is Mortal Kombat; the last enemy you fought before the Endurance matches was yourself.

Character Tiers can force almost every single match to be a Mirror Match because everyone spams the top tier character(s). This trope is not limited to fighting games, any game with a competitive multiplayer and the ability for two or more players to choose the same character can have mirror matches. It can also happen in other media, though there it is more likely to have an explanation.

Collectible Card Games use the term as well, but with a different meaning. In a CCG, a "mirror match" is when two players with the same deck theme play against each other. While the decks likely differ in spots, the central strategy is the same.

Functionally identical is when a Ditto Fighter (most likely of the Mokujinner variety) imitates their opponent.

Not to be confused with Spot the Impostor or Mirror Character.