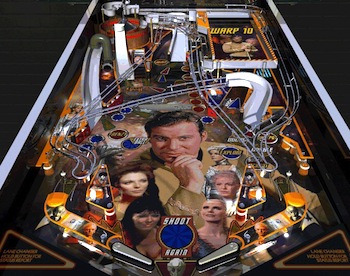 Star Trek Pinball is a Digital Pinball Table developed by SCI (Sales Curve Interactive) Ltd. It was released in 1997 by Interplay Entertainment for the IBM Personal Computer.

As the title indicates, this title consists of three original pinball tables associated with Star Trek: The Original Series, accompanied by sounds and images from the show:

It is rumored that the game was a rushed cash grab by Interplay, an attempt to raise money due to problems during development of Star Trek: The Secret of Vulcan's Fury. Unfortunately, every aspect of Star Trek Pinball reinforces this point, making this a classic example of The Problem with Licensed Games. The Trek license fails to cover the game's numerous shortcomings — unbalanced gameplay, inconsistent and unrealistic ball behavior, and poorly-designed tables that are overly complicated and frustrating. Like the Pro Pinball series, the game uses pre-rendered playfield graphics, but there is only one camera angle, and the graphics are pixelated and grainy. Then there are the Video Game-only features, such as smashing a slow-moving ball for extra points, and an assortment of game-crashing bugs.

Aside from the novelty of head-to-head competition in "Nemesis", this is an entirely forgettable title.