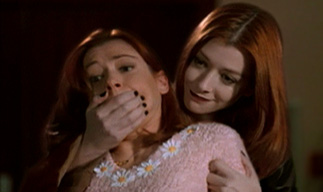 The Launcher of a Thousand Slashfics.
"This is a dumb world. In my world, there are people in chains and we can ride them like ponies."
—Vamp Willow
Advertisement:

Anya unsuccessfully entreats D'Hoffryn to help return her amulet and, with it, her vengeance demon powers. When she's turned away, Anya vows to find someone else to help.

Principal Snyder browbeats Willow into tutoring basketball star Percy West. Percy makes it clear that his idea of "tutoring" is Willow doing his homework for him. Frustrated and unhappy with being "book girl", Willow snaps at her friends for taking her for granted and then agrees to assist Anya with a spell she claims is to retrieve a harmless necklace that was stolen from her mom's apartment. But rather than retrieving the magic amulet, they accidentally summon the vampire Willow from the alternate universe in "The Wish" and sets her loose in Sunnydale. Neither Anya nor Willow realizes the consequences of their spell.

Wishverse Willow goes to the Bronze, where she beats up Percy and shows her vampire face to Xander and Buffy. Two vampires sent by the Mayor to kill Willow attack her, but she turns them to her side. Buffy and Xander tell Giles that Willow has been killed and turned vampiric, but the genuine Willow appears in the door, cuing a round of hysterics.

Angel and Anya drop in to the Bronze, just in time to see Wishverse Willow and her new cronies hold the club hostage. Angel escapes to find Buffy. Anya realizes her error, offers to return Wishverse Willow to her own world in return for help in retrieving her amulet, and suggests capturing the other Willow to fix the spell. Angel, Buffy and Xander head for the Bronze, but Willow, returning to get the tranquilizer gun, is cornered by her doppelganger. Willow shoots her clone unconscious and locks her in the library cage. The gang discuss plans, and Buffy says that she has a really bad one... Outside the Bronze, Willow is dressed up in her Wishverse counterpart's leather catsuit, about to go in alone and try to defuse the situation. Meanwhile, a dim-witted Cordelia releases Wishverse Willow.

Inside the Bronze, Anya calls out Willow as a human, despite Willow's "look at my outfit" defense. Buffy barges in and stakes the other vampires, then captures the returning doppelganger. Anya and Willow return vampiric Willow to the Wishverse, where she is immediately killed. Before she dies, she mouths a very un-Willowish obscenity.

The next day, Willow declines Buffy's suggestion that they go to the Bronze that night and is telling her how she plans to avoid vice for the rest of her life when Percy, thoroughly intimidated by "Willow" strangling him earlier, shows up with all his work completed and hands her a teacher's apple before making a hasty retreat. Willow decides to take Buffy up on her offer after all.