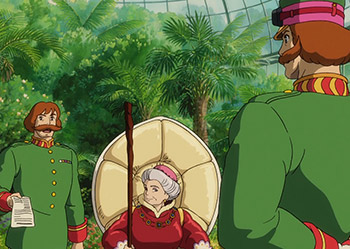 Busted!
Barmy: [answering phone] Mr. Wooster's residence. [pause] Where is Mr. Wooster? He's not at home, sir. I'm Jeeves. [pause] What do you mean 'you think not?' [pause] Oh! [He hangs up.]
Bertie: Who was it?
Barmy: Jeeves!
— Jeeves and Wooster
Advertisement:

When an imposter is spotted because the person he's impersonating is in the group/room with, or is himself, the person they're trying to deceive.

If you have a good enough disguise, you might still be able to get away with bumping into the person you're impersonating if you convince them that you are actually their reflection in a mirror, or if you are really lucky, find out that your disguise is a uniform within regulation. A particularly audacious infiltrator might respond by accusing the person they're disguised as of being the imposter. Those liable to Poser Hating are also generally vulnerable to this. This is the key risk run by anyone executing a Janitor Impersonation Infiltration.

A variation that occasionally appears in superhero stories is for the hero to encounter someone impersonating his Secret Identity.

Compare I Am One of Those, Too, I Am Spartacus, Legendary Impostor, and Fright Beside Them.

Not to be confused with Actually, I Am Him.

Alternative Title(s): Because Im Jonesy, Youre Disguised As Me, Confronting Your Impostor