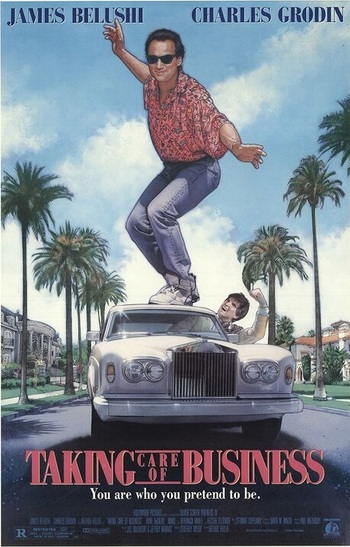 Jimmy Dworski: Just give me my reward and I'm outta here.
Spencer Barnes: Reward, are you crazy? I should sue you for everything you've got!
Jimmy Dworski: I'd like to see that. I got nothing.
Advertisement:

Jimmy Dworski (Belushi) is a convicted car thief and diehard Chicago Cubs fan who wins tickets to the World Series in a radio contest. Unfortunately, he still has a couple of days left to serve in prison, and the warden will not let him leave and come back. With the help of other inmates, Jimmy stages a riot so he can sneak out of prison to see the game. On the way, he finds the Filofax of Spencer Barnes (Grodin), an uptight advertising executive, and Jimmy takes on Barnes' identity, while the life of the real Spencer Barnes is spiraling into the gutter. When Jimmy and Spencer finally come together, an unlikely friendship forms.

The film is notable for being the first screenplay work written by J. J. Abrams.