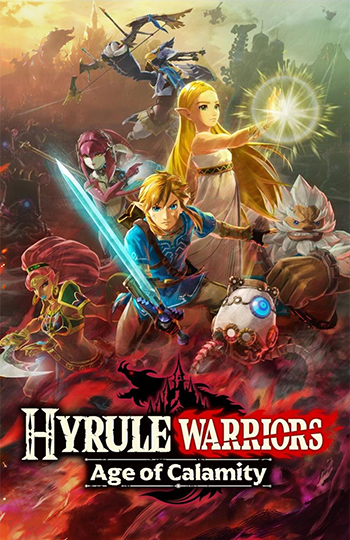 "I think you are now ready. Ready to hear what happened 100 years ago."
"The history of the royal family of Hyrule is also the history of Calamity Ganon. A primal evil that has endured over the ages."
— Impa
Advertisement:

Hyrule Warriors: Age of Calamity is a Hack and Slash Spin-Off game in The Legend of Zelda franchise. Produced by Nintendo and Koei Tecmo, and developed by Omega Force, the title is the second entry in the Hyrule Warriors subseries. Unlike the previous game, which served as a non-canon Intra-Franchise Crossover, Age of Calamity serves as an Alternate Timeline narrative taking place 100 years prior to the events of The Legend of Zelda: Breath of the Wild. A demo consisting of the game's first chapter was released on October 28, 2020, with the full game being released on November 20, 2020.

Set 100 years before the events of Breath of the Wild, the game's story follows Link, Zelda, and Impa as they fight a desperate battle to prepare Hyrule for the upcoming onslaught of Calamity Ganon, an Ancient Evil that seeks to destroy their kingdom with armies of monsters at its command. When a mysterious miniature Guardian from the future comes bearing evidence of their failure to accomplish this, the trio expedite their efforts in locating and working together with the four Champions of Hyrule's other races to better bolster their forces and hopefully change their fates.

Like Hyrule Warriors, the gameplay combines the 1 vs. 100 combat, weapon classes, and light Real-Time Strategy present in the Dynasty Warriors franchise with various mechanics present in the Zelda franchise; in this case, specifically those from Breath of the Wild, such as the flurry rush, the four Sheikah Slate runes and elemental rods, Power-Up Food, and others.

Untold Chronicles From 100 Years Past (Part 1,

Age of Calamity contains examples of:

For a group of seers, they didn't foretell the possible consequences of misusing a cursed artifact possessed by a dark god, except for the one left alive as a pawn.

Example of:
Evil Is Not a Toy

For a group of seers, they didn't foretell the possible consequences of misusing a cursed artifact possessed by a dark god, except for the one left alive as a pawn.