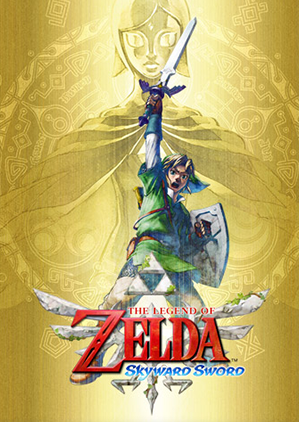 The best way to perform a Title Drop.
"This is a tale that you humans have told for many ages, generation to generation... but there are other legends, long hidden away from memory, that are intertwined with this tale. Now, a new legend bound to this great story stands ready to be revealed. A legend that will be forged by your own hand."
— Fi
Advertisement:

The Legend of Zelda: Skyward Sword is the sixteenth game in The Legend of Zelda series, and the first chronologically (with the second in the timeline currently being The Minish Cap, which takes place an unspecified amount of time after this title). The game was released in November 2011 for the Wii, as part of the series' 25th anniversary.

The story follows Link, a young man who lives in a land above the clouds called Skyloft, where knowledge of the surface below is all but lost. Among Link's friends in Skyloft is a girl named Zelda; Link wins Skyloft's annual bird-riding contest and he gets to take her out on a date afterwards. As they fly among the clouds, a dark whirlwind springs up around the two, separating them; Link's Loftwing saves him from his fall, but Zelda is lost to the surface. Upon returning to Skyloft, Link is visited by a mysterious being named Fi, the spirit who inhabits a weapon, hidden in the temple of Skyloft, known as the Goddess Sword.

In order to save Zelda and restore peace to Skyloft, Fi leads Link to a land below the clouds devoid of humans and inhabited by strange creatures facing an onslaught from monsters who seem just as interested in locating Zelda as Link. Link must travel back and forth between the surface and Skyloft in order to find Zelda and defeat the forces of the Demon Lord Ghirahim, the evil ruler of the surface world who is planning to use Zelda to awaken an even greater evil from a dark, bygone era.

At the Press Conferences and at E3, Nintendo mentioned that they built this game around Wii Motion Plus partially due to criticism of the tacked-on motion controls in the last console game, Twilight Princess. That game began development for the Nintendo GameCube, but was later ported to the Wii when Nintendo began to ramp up publicity for the then-new system (The GameCube version that eventually arrived later is largely identical, barring some differences in the control scheme and the orientation of the world map). However, Skyward Sword requires the Wii Motion Plus accessory in order to play. In other words, this is the Zelda game made specifically for the console. The game's visual style resembles both Twilight Princess and The Wind Waker in that the designs for the characters have realistic proportions while still being cel-shaded and brightly colored. Miyamoto says that the painterly style was specifically inspired by Impressionist paintings, and was done to accommodate the new control scheme by making enemies and their attacks easier to see. In terms of gameplay and themes, it amalgamates several elements and mechanics from previous installments, including the aforementioned two (which is on par with the game's role as a Milestone Celebration of the series).

An HD remaster for the Nintendo Switch, co-developed by Tantalus Media much like Twilight Princess HD, was released on July 16, 2021. The Switch version retains and enhances the motion controls (which, this time, operate with the system's Joy-Con) but also introduces a more traditional control scheme so the game can be played in the console's handheld mode and on the handheld-only Switch Lite. It does this by moving the controls for sword swings and the like to the right analog stick. It also runs at 60fps and comes with number of quality-of-life changes to improve the gameplay experience, such as cutscene and tutorial skipping.

Master, due to size constraints, I calculate that there is a 0% chance that you will find any tropes on this page. I suggest you look for them in the subpages.
Feedback