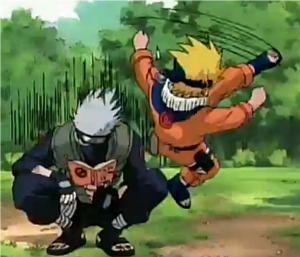 "Do you mind? I'm trying to read."
Spanker: What are you going to do about it, old man?
Jason Bentley: Well first I'm going to lean this way... [dodges punch] lean that way... [dodges punch] have a glass of wine... [elbows Spanker as he drinks] and then scratch my knee. [knees him in groin]
— Detectives on the Edge of a Nervous Breakdown
Advertisement:

There are three main versions of this trope, and it's an easy trope to get:

This makes the character appear more awesome with minimal effort on the part of both character and artist. Only the first one doesn't completely upset the mood and generally means the fight scene is ending or shifting to a different mood. The first one is generally a start of the fight move. The user gets extra points if their dodging causes the attacker to fall into harm.

Part of The Law of Diminishing Defensive Effort; if they stop being "nonchalant" you know that they're in trouble. It will often overlap with Excuse Me While I Multitask and Casual Danger Dialogue. If you're going on the offensive after this trick, expect an Offhand Backhand to happen.

Cool Miis will occasionally jump out of the way of enemy attacks. "Too slow!"

Cool Miis will occasionally jump out of the way of enemy attacks. "Too slow!"