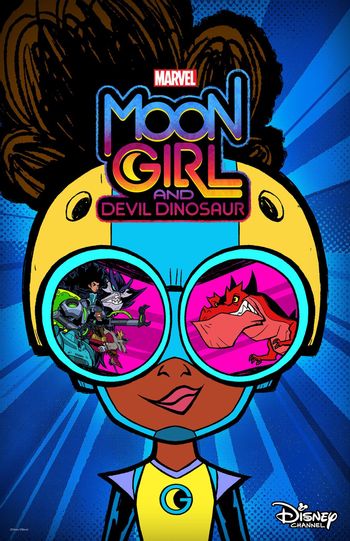 If you didn’t know it, then now you know!
Advertisement:

Moon Girl and Devil Dinosaur is an upcoming Disney Channel animated series based on the characters appearing in Marvel Comics. It is produced by Disney Television Animation (a first since Disney’s acquisition of Marvel) and co-developed and executive produced by Laurence Fishburne, who will also voice the Beyonder in the series.

True to the comics, the show will follow young genius Lunella Lafayette (Diamond White) as she accidentally summons - and befriends - the T. rex Devil Dinosaur (Fred Tatasciore). Together, they set out to protect New York’s lower east side from villains.

Also in the voice cast are Sasheer Zamata, Jermaine Fowler, Libe Barer, Gary Anthony Williams, and Alfre Woodard. The series is set for a two-part premiere on February 10, 2023, after several delays.